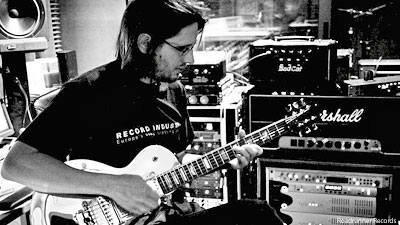 For many Porcupine Tree fans, 2002's 'In Absentia' was perfection. It was one of those rare albums you can listen to all the way through, without skipping over a single track. Frontman Steven Wilson freely admits 'In Absentia' may very well be the band's crowning achievement, but thinks 'The Incident' (which is subtitled 'After This, Things Will Never Be the Same Again') gives 'Absentia' a run for its money.

"I'm aware that 'In Absentia' probably is, in many respects, a watershed record for us," he reflected during a recent interview with Noisecreep. "It was the first record we made that had metal as part of its DNA ... The first time metal came to the forefront. So, there was definitely a sense that the record was in the right place at the right time. Its like anything, though. I wasn't aware, at the time particularly, that it was any better than any other record we've made. In retrospect, I can say it was probably the best ... possibly even still the best record we've ever made."

"I like to think this record competes with it, but the thing is, only time will tell," he continues. "Usually, when I've finished a record, I think it's probably the best record I've made and six months later, you have more of an objectivity about it. 'In Absentia' was a really good bunch of songs. It felt fresh because we were bringing in metal for the first time, and I think that did freshen up the sound of the band, and it brought us to a whole new audience of younger people."

'The Incident' arrives in stores September 22, and features a ton of epic guitar solos. The songs shift from hard-driving riffs to acoustic interludes to the kind of ambient noise that could only be described as the sound you'd imagine a robot's stomach might make if he were hungry - assuming robots have stomachs.

"It's an adventure," Wilson says. "But all of our records have been musical adventures. This record, its shape and its structure is very uncompromising."

While the record will yield a video for the track "Time Flies," 'The Incident' isn't a singles heavy disc. Wilson says he couldn't make such a record, even if he were inclined to.

"And that's part of the reason why we're still, for most people, an underground band, and that's the price you pay for never thinking about those things," he says. "Its not even like I've made a conscious decision not to think about them, I'm just incapable of it. There have been times in my career where I've tried to write a single, and it's just a disaster."

But when you're writing a record inspired by a car crash, which deals with the concept of the word "incident," and how it can be applied to sometimes life-altering experiences, one shouldn't expect radio singles. Its more heady than it is accessible.

"There are always four or five landmark moments in everyone's life, and they can be split-second moments, where, after this, life will just never be the same again," Wilson says. "It's a very loose concept, and can encompass many different things. Maybe there's one or two people in your life where you really feel 'She's the one,' and it doesn't work out. And that does change us. It certainly changed me, as a person. And I think about that person every day, and will for the rest of my life. I know I will, whether I want to or not. I haven't seen her in 15 years, but I think about her every day."