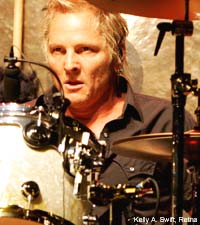 Motörhead's current U.S. tour took a surprising turn when the band announced that Guns N' Roses and Velvet Revolver drummer Matt Sorum is joining the metal legends for part of the jaunt. It's nothing permanent, mind you. Sorum is filling in while Motörhead's current sticksman, Mikkey Dee, takes off to Europe to appear on the Swedish version of TV reality show 'I'm a Celebrity ... Get Me out of Here!'

"There was a breakdown in communication really," Motörhead frontman Lemmy Kilmister tells Noisecreep from backstage in Atlantic City, N.J. "Our management didn't know that he'd signed up for this when they booked the tour. We didn't want him to have to cancel, they might have sued him or something." Which could have been quite expensive for Dee. "Yeah. We're doing him a favor," Kilmister jokes dryly.

Motörhead is due to begin recording a new album in January, so why tour now? "It's necessary to keep our faces in front of American audiences. They need some rock 'n' roll from us, there isn't enough of it." Plus, what with old pals Reverend Horton Heat and Nashville Pussy opening, Kilmister couldn't cancel such a good bill. RHH and Kilmister have performed together in the past -- does that mean a jam is on the cards for this tour? "It hasn't happened so far," he says. "But I wouldn't rule it out."

Noisecreep wonders if Kilmister would like to appear on the reality TV show, too? "No, no thank you. I've seen the British one, and it's not for me," he says diplomatically. "Well, you've got to be polite haven't you. But, yeah, it's f---ing boring as hell, God damn it!"