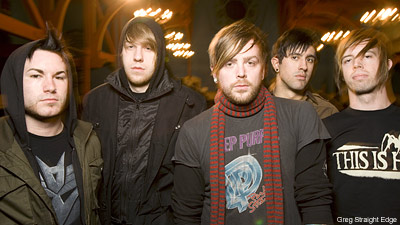 Who are It Dies Today? A bunch of extra-good looking metalcore dudes from upstate New York? Sure. But Noisecreep probed the members, learning who they are beyond the band. We even found out which member has eaten a pound (!) of bacon. Sure, bacon is "meat candy," but a pound? Read on to find out more.

Christopher Cappelli/Guitars: "When not on the road, I enjoy cooking bomb meals for myself at a local restaurant, where I'm head chef. I also enjoy a fine wine. Although I'm partial to the Sangiovese grape, which is the main component in Chianti and other fine Tuscan wines, I've been enjoying Temperanillo wines as of late, which is the main grape in Spanish wines such as Rioja."

Mike Hatalak/Guitars: "I literally do nothing all day long except lounge around in my boxers. Recently, it occurred to me that I should get into underwear modeling, so I've been doing that for the past three weeks. I also have a midnight bike club, where we ride around town on our ten-speeds in a huge group almost intimidating people. On the side, I run a recording studio for chump change when the modeling is at its down time."

Jason Wood/Vocals: "I bar tend four nights a week at a couple dive bars in Niagara Falls and Buffalo. The interaction and setting reminds me of tour so it's extremely fitting to my passion, especially karaoke night. I love to cook and experiment with new recipes by feeding my roommates."

Steve Lemke/Bass: "I like to play Xbox 360 and 'Call of Duty,' 'UFC' and 'NHL 09' are my favorite games. I'm into watching and playing hockey, am a huge horror movie fan and I have, on multiple occasions, as recent as two weeks ago, eaten a pound of bacon as a meal."

Nicolas Mirusso/Drums: "My name is Nicholas John Mirusso, or according to the Niagara Falls community, 'The Mootz.' I used to destroy your AOL chat rooms constantly in the 90s as a wee lad. Glad to see you're still around shredding. When not hanging out with my girlfriend, making babies, I work a grueling 9 to 5 with an insanely rad Hardscape Company, catching a wicked farmer tan. I eat Gummi worms, beef jerky, Asian noodles and sourdough pretzels constantly. I'm almost as constantly on the toilet as a result."

Cappelli said the new album 'Lividity,' due out this summer, is their most "raw and intense." It's also Wood's first wide-release since taking over on vocal, so he's "looking forward to the constructive and not-so-constructive criticisms of the world!" Lemke just wants to play new music because "we've been playing the same set list for like three years! The Mootz thinks it "clearly crushes anything we've done in the past."

Filed Under: It Dies Today, ItDiesToday
Categories: News
Comments
Leave A Comment
Back To Top