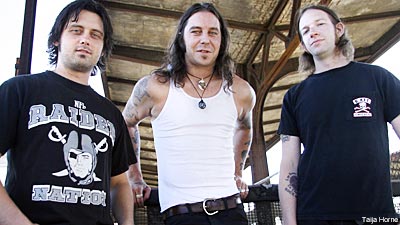 "I actually don't even really smoke weed, and I haven't for quite a while. As much as people would hate to hear it, we're not really stoners. We're more drinkers," High on Fire drummer Des Kensel admitted to Noisecreep. "But I'm sure getting stoned and listening to it might take it to a whole new level."

"I think if we're happy with something, our fans will be happy because [of] similar taste and stuff," theorized Kensel. "I feel that it's been a pretty big progression compared to any of our other stuff. I mean especially if you listen to our first record compared to this one, I mean it's definitely faster. I feel as musicians we've progressed and songwriters we've progressed. And yeah, me personally as a drummer, [I've] progressed. So people would say that there hasn't been much of a progression. Well, I mean, if they don't think so, then they don't think so. But we do. So I guess that's what's important."

'Frost Hammer' is the first single from 'Snakes for the Divine.' You can catch High on Fire on tour through May in many parts of America.