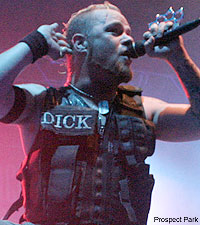 Last week, the German police detained Jeremy Spencer, Zoltan Bathory and Matt Snell of Five Finger Death Punch while the band was en route to the country's Rock Am Ring Festival, which they were scheduled to play on June 4. The Munich Police Department alerted the Nuremberg Airport authorities, and a group of officers took the band members into custody for an alleged international weapons violation.

International weapons violation? What a scary charge to be laid at the doorstep of a bunch of touring, tattooed metalheads! Turns out it was all a big -- make that huge! -- misunderstanding, and the 'weapon' in question was just a brass knuckle mic. Once the snafu was sorted out, the German cops release the band members, who went on their merry way to play as scheduled.

"We have been cooperating with the German Police and you could say, so far, the whole procedure went over fairly smoothly. They did understand what was going on, but had no choice other than to uphold their laws," guitarist Zoltan Bathory told Noisecreep. "We get it. As visitors to any country, we have to respect their internal laws; though fairly often, those laws are unbeknownst to us and may be drastically different from our own."

He has a point there, as the fine print that most people neglect to read on their American passports does forewarn travelers that what may be deemed a minor infraction in the U.S. might very well be considered a major one in another country. So be mindful!

Bathory continued, "Some laws can be even harsh, like you can be legally beaten with a cane in Singapore. Or there's a British couple in prison in Dubai simply for kissing in a restaurant. Apparently public kissing is punishable by prison there, so remember next time you heading to Dubai ... no smooching! As for Germany, the laws and the police are much much friendlier. However, if you have microphones in the shape of brass knuckles, you will have to part with your precious stage prop, and expect a hefty fine for weapon violation, prop or not. It's apparently a no-go."

Bathory also said, "In retrospect, I think it was good choice to not to bring our six-foot, M2 machine guns, the 50-cal bullet belts and the M16 microphone stands we are regularly using in the States. Hah! I can just imagine the security guy's face as all this stuff is going through their X-rays. [laughs] They probably they would have called the UN."

Despite the hiccup and weapon-mimicking stage props, Bathory said the band is "safe and sound and back on schedule" after being released.

Be sure to check out the band's moodily metallic cover of 'Bad Company' from their second album, "War is the Answer,' here.