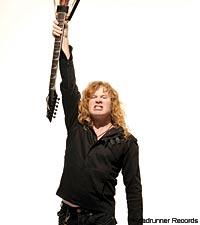 Dave Mustaine is none too happy. After spending much of the year trading barbs with Metallica, the Megadeth frontman has now set his sights on Roadrunner Records, the label that's released the band's last two LPs, 2007's 'United Abominations' and 'Endgame,' which dropped last month. According to Mustaine, sales for 'Endgame' aren't where they're supposed to be, and it's none of his fault.

"It seems like Blabbermouth and Roadrunner U.S.A. are the only people who don't like me or [Megadeth] anymore," Mustaine writes in an online post. "Such a shame." This new message follows last week's Mustaine missive, in which he accuses the label of failing in its efforts to promote 'Endgame.'

"I don't know what to say," he wrote. "How a record company could be presented with a worldwide critically-acclaimed record, and that they can let it plummet down the charts in just four weeks into the hundreds, is inexplicable. I knew I shouldn't have done this. Why didn't I trust myself? I regret a lot of things in my life, but this is the most regrettable."

Not once in his tirade does Mustaine acknowledge the hard-to-refute fact that the music business has changed drastically in the last five years, because people just don't buy records anymore.

According to Nielsen Soundscan, 'Endgame' has sold around 72,000 copies. During its first week in stores, the disc sold close to 45,000 copies, with sales dropping the following week to 13,000. During week three, the disc scanned 9,000 units, and in week four, only 5,500 copies were carried away from record stores.

Mustaine has also joined Metallica's Kirk Hammett, in shooting down the rumored possibility of a 'Big Four' tour, consisting of Megadeth, Metallica, Slayer and Anthrax. Mustaine says, while it would be "a once-in-a-lifetime opportunity," and "the chances of this happening are probably not going to come around again in the future; due to personal plans, new ventures, and the inevitable passing of torches to the next generation in each of our respective genres. If it happens, when it happens, we, as well as my other three fellow horsemen, will let you know."