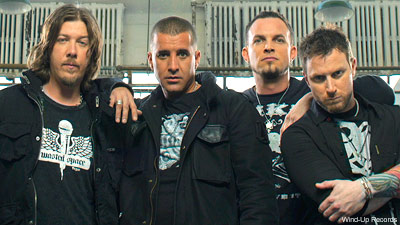 In the middle of the year, Creed reunited, via a post on their official website. Just a few scant months later, 'Full Circle' was released and the band hit the road.

Today, Creed releases a new concert DVD simply titled 'Live.' The DVD let's fans relive the recent reunion tour and was shot with 239 high definition cameras, which landed the band in the 'Guinness Book of World Records' for the "most cameras used to film a concert." Songs included on the DVD include 'Higher' and 'Arms Wide Open.'

While the band celebrates the new DVD just in time for the holiday season, the guys in Creed are also actively promoting some of their new songs. The band recently worked on a clip for their song 'Rain' off 'Full Circle.' Watch the clip as director Gavin Bowden walks you through the making of a big budget rock video.

That's not all. Since Creed was gone for so long, they want to give back to their fans. The band pulled together a special behind-the-scenes video, documenting the recording of 'Full Circle.'

Creed will likely head out on tour again sometime next year.

Filed Under: @verizon, creed
Categories: News
Comments
Leave A Comment
Back To Top