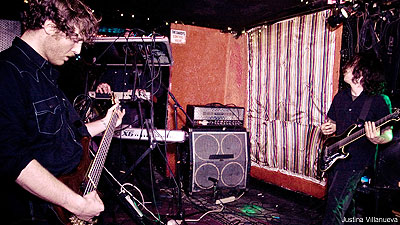 I usually go to four or five shows a week. It's how I discover many of my favorite bands and meet lifelong friends. Sometimes I see bands that are less than stimulating. Sometimes I see bands that are great. But, it's not so often that I see a band that makes me want to start a fan club for them. Philadephia's Cleric was one of those bands. I was completely blown away.

On March 1, Cleric headlined a show at New York City's Lit Lounge that included a raw black metal trio called Syphilitic Lust, a free jazz/metal duo called Barr-Nevai and an electric combo that I can't really find words to describe called Tit City. Needless to say, it was an interesting and eclectic night.

I watched Cleric in devastation, because I feared I might not be able to put to words what the hell was going on. Even though there is usually a roughness to the sound quality at a place as small and abused as Lit Lounge, Cleric sounded as clear as a freshly-mixed Pro Tools track. If you've been craving some experimental metal that is cohesive and dynamic, you need to check out Cleric.

Their influences listed on MySpace include the most random combination of musicians and bands I have ever seen. From Dredg to Refused to Pig Destroyer to Snot, it's obvious that the four-piece are straight up music lovers. It's also evident in their intricate songs. Cleric successfully fuzes a cluster of grindcore, doom, Dillinger Escape Plan-type time signatures and all with the oddness inspired by bands like Frank Zappa and Mr. Bungle.

Cleric have an album called 'Regressions' coming out on April 27th via Mimicry and a show at Championships Bar in Trenton, N.J. on March 29. Be sure to check out 'Cumberbund' -- which is currently available from Sound Devastation on vinyl.