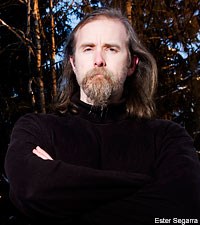 Burzum -- the name itself means 'darkness,' and the mere mention of mastermind Varg Vikernes heralds an intense reaction, be it negative or positive. There are few more polarizing figures within extreme metal than Vikernes, who is now almost better known for his violent past and extreme ideologies than for his music.

Murderer, Nazi, Odinist, racist, arsonist, blasphemer, rabble-rouser, ex-convict, visionary, genius, scum -- whatever one's opinion on the man might be, his contributions to and impact upon the extreme metal scene are incalculable. Without the bleak, hypnotically raw sound that the Norwegian musician created on his earlier albums -- 'Aske, Filosofem, Det Som Engag Var, Hvis Lyset Tar Oss,' his self-titled and has revisited with 'Belus', his first new release in over 15 years -- black metal as we know it would not exist.

Vikernes has a taste for the controversial and has made some hair-raising statements over the years, bashing everyone from Christians to people of other races to his fans and quite literally everything in between. In a rare interview with Noisecreep, Vikernes carried on his tradition of controversy, spitting out yet another negative proclamation, albeit one of a tamer sort than usual (though sacrilegious in an entirely different way). This time around, he chose to attack the very forefathers of the genre he helped refine, condemned and has now returned to -- Venom.

You've been quoted as saying that Venom are 'posers.' As a band that arguably started -- or at the very least, gave a name to -- the black metal genre, what about Venom is false in your eyes?

Venom started nothing. Euronymous used their album title to name a new genre, made up of Darkthrone, Mayhem and Burzum, and that's it. Nobody used that name for any type of music before Euronymous did in 1991. Venom was a joke in the '80s, their heavy metal music sucked big time, and I really have no interest in them -- not then, not now. I wore a 'Black Metal' Venom T-shirt once, in January 1993, to promote black metal, and I regret having done that ever since.

Are you in contact with any of your old friends/bandmates from Norwegian black metal scene? Do you take any interest in their current projects?

I have had some contact with Mayhem, Darkthrone and the old Uruk-Hai drummer, but that's it.

There you have it, ladies and gentlemen. Burzum's music may still be rooted in the past, but its creator has long since left that world behind.