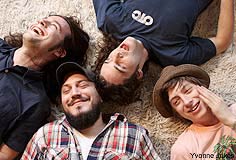 Take one of the most ferocious animals around and add liquid death. What do you get? Acid Tiger, a brawl at a house party in sound brought to you by those who make up Converge, Thursday and United Nations.

Got it? Good, just know this type of loud and heavy doesn't match the day jobs, which as guitarist Lukas Previn told Noisecreep was the point of getting together. "There was no plan or guideline for us other than getting our friends in a room and playing all the riffs we had that didn't work for the other bands we are in,"

As expected many have shown up to Acid Tiger shows expecting breakdowns and blast beats, which you can't fault them with Converge's Ben Koller behind the kit. "Sometimes the heavy scene has its bizarre enclosure of what is acceptable in songwriting for the kids to get their mosh on to," says Previn.

"If you peered at any of our iPods you would find as much Starland Vocal Band as you would Pantera. A lot of it is about doing the kind of music we love without the borders of a scene. Even still, kids in Reign Supreme jerseys (only using them as an example because on the last tour this actually happened multiple times) walk out confused when the breakdown isn't mosh-able."

Much praise had made its way to the members of Acid Tiger for their self-titled debut, a record many seem to have a hard time putting into the genre bucket. Some have referenced '90s math rock for the hyper riffs and some have written that the Doors play an influence.

Previn admitted shock over that legendary name drop, but he takes it with a smile. "We are surprised and totally honored to have comparisons drawn to bands from an era of music that encapsulated the idea of a record being a complete entity. An audio novel. A start a middle and an end. It's time tested and totally rad to be even mentioned in the same sentence."

Truly the band's debut shows no sigh of scene clichés and standards. Case in point the track 'Big Beat' displays harmonica and a drum solo in need of a kit that floats and spins. Previn says the band had no hesitation or fearful thought on including such aspects to the album. "The minute we start asking ourselves if things like drum solos are too much is the minute we start our Rage Against the Machine wedding cover band (Party Versus the Robots is the actual name of this back up plan we actually have) and move to a condo in Burbank and do nothing but bathe in wolverine c--"